The problem with the healthcare debate is that it’s really not even about healthcare anymore.

It has evolved. What was once a debate about the Utopian goal of covering millions more people with better care at less cost---a quixotic errand if there ever was one---has given way to the real show: will Obama crack if he fails? The healthcare debate has evolved into a test of wills between a petulant child trying to get his way long after his exasperated parents have said NO.

Our young narcissist-in-chief gave a good speech last night, but no less was expected. He gives good speeches. He knows it. He told the Senate Majority Leader as much: “Harry, I’ve got a gift.” What a conceited boy.

What was about healthcare has become about his “parents,” the American people, teaching him a lesson in humility... (more) 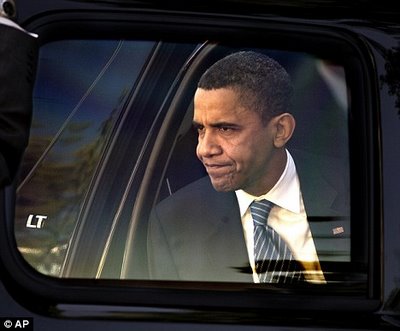 So the real story is not healthcare. It’s about the monstrously bloated stimulus package which had to be passed in the twinkling of an eye, only to sit on the president’s desk while he caroused in Chicago for three days over the President’s Day holiday.

It’s about taking over Chrysler and GM through bailouts in order to serve the interests of the UAW. A gambit has cost the American taxpayer some $80 billion of which we are expected to receive as little as $40 billion in return.

It’s about providing a massive giveaway of $100 billion to the teachers unions (his other core constituency) when only 38% of people believe in increasing spending to public schools.

It’s about a feckless strategy in Afghanistan. After the deadliest month there, what are our goals?

It’s about being rolled by Washington politicos and petty tyrants.

It’s about backing a Chavez-clone in Honduras.

It’s about CIA witch hunts, which no thinking person believes makes us safer in the least.

It’s about surrounding himself with all manner of unsavory characters, to whom no decent person would give the time of day: Bill Ayers, Reverent Wright and the latest roustabout, Van Jones.

It’s about Czar-mania in the Whitehouse, 30-plus and counting with no disclosure of pay or activities let alone scrutiny.

And, it even reaches back to the campaign when candidate Obama blocked access to school records at Occidental College, Harvard or Columbia Universities and even during his private school days at Punahou School in Honolulu. Oh, and the fact that he claims his scheduling records during his State Senate years are lost.

Yes, and probably crack analysis. No pun intended. Many an ancient War was begun over such deeper causes, just and unjust alike, however abstract the causes might seem, the end can be an abyssmal state, indeed. For all concerned.

Loved other articles on this blog as well.

Thanks, and I forgot to mention keeping 300 million people waiting 17 minutes. The gall.

His library will need only one book, or page, or letter “I” and a few mirrors.

They will reflect his accomplishment.

citizen5408 also has good info on Honduras’ struggle vs the axis of evil, Obama/Chavezistas!

This IS all about him after all. His EGO won't allow the public to think or do otherwise. This man is THE most dangerous individual to the security of our freedom and liberty that we will ever know.

He knows that if this bill fails, his political career will be deep trouble. He cannot and will not let this happen. He will do what ever he has to, to be sure that it passes.

Therefore, we can be sure that they will pull a Midnight Legislation maneuver and cram this thing down our throats. Then, with the help of Reid and Pooploosli, they will mutate it through committee to go beyond what the public was so concerned about.

This is a debate about the narcissism of our phony ‘American’ president. He is utterly boring and predictable in the extreme and is without doubt the most dangerous man ever to take over the oval orifice.

LOL, not sure why you sent this to me on a four year old thread, but I do indeed agree with it!